Rainbows and ferrets and boots..... Oh My! 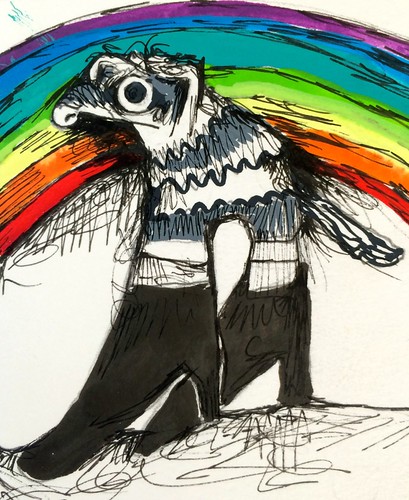 So here I am at another event to meet others who are really publishing.  Children’s books, YA, and picture books.  These events are there to understand the business and what sells and what doesn’t and sometimes even what sells that everyone thinks is total crap but still works for the mysterious masses.

I’m an illustrator and for that matter a writer and storyteller.  The illustration conference was wonderful that I went to this past June.  Insightful and the discussion was the process and the work that goes behind the book.  Once you have that agent or publisher and the book accepted you are off to the races.. A process of back and forth collaboration and change and hard work.  This was very good advice.  I was pleasantly surprised by our speaker of the day who has won several Caldecott awards and was genuine and open to his process.

Fast forward to the next two conferences that I went to which were large and open to both writers and illustrators.  This is everyone meaning everyone that can spend over 100 bucks for the event can sign up.  There are speakers and publishers and workshops on how to publish.  Lunch is provided and for an extra amount of money you can get your work critiqued whether it be art work or your story.

Its a full day and in the beginning they have awards to authors that have published speak.. then its a handful of quick stories that they grab from a grab bag of those that have sent something in.

This is where I get lost.

When I say grab bag I mean grab bag.

Again I’m lost thinking get rid of this in the conferences?

There’s a story of a kid seeing a rainbow.

And some rhymes and something about a babysitter and a raft and did I say rainbow?  Yes, rainbow.  And red is for anger and green is for envy.  Enough already.  So I start doodling to just move on with the time.

They go through more of the same then its lunchtime but before that I am introduced to woman on the left of me.  Woman on the left seems nice.  She says she’s writing a book about a ferret.  She doesn’t have a ferret but she likes ferrets and you know it will be a great book. Okay then so I say,
“Do you have a blog or are you on Facebook or Google or Pinterest or Twitter or Tumblr.?”
No.  She replies.  “I don’t have time for that.”  Okay then. Ugh and then I look up to see her face has this look to it.  As if she had it out of the window of a fast moving car for awhile.  Fresh faced from facelift city and now she’s going to be a writer?

This is where I am just done with the day and want to eat lunch with my friend Jen and then skip and go boot shopping.  I’ll meet more creative people there just standing in the aisle trying to balance my feet with a new pair of boots.  I’m with the public.  That is where the stories are and the art comes from. People and lives and constant movement.  The good and the bad.  Overhearing this and that. Oh yeah and I need an agent.  This is what the conference was about.  And I’ll have to do the work on my own.  In my new pair of boots.  Without ferrets and rainbows and facelifts.

For now I just walk, that’s what my boots are meant for.