Birthdays, Sparklers, and the Wild West. 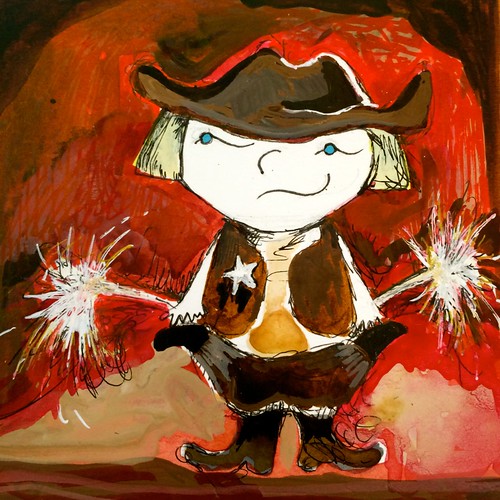 I have memories that sneak up on me as I get older.  Flashbacks of nostalgia that are like a blip on a screen.  A split second image of fun. One memory was sparklers on a birthday cake.  As I dug deeper in thought I was under the age of ten and we were at a place that was like the Wild West.  No we were not out west.  It was a theme restaurant in Pennsylvania.  Close to the proximity of home.  The name of the restaurant was The Longhorn.  Not to be mixed up with the one chain they have today.
This restaurant apparently was built in the 1960s and lasted til the 1980s where it then became Pulsations.
The entrance was like a Saloon filled with leather and old wood.  The waitresses wore cowboy boots and skirts and hats.  Their hair was teased and their makeup done more for the 1970s then the late 1800s.  They had holsters on each hip with silver cap pop guns.This was a place where theater met dinner however kitschy .  It was not pc or vegetarian.  You ordered meat. Then if it was your birthday the real drama began.  All the waitresses came together with one holding a white cake filled to capacity with lit white sparklers.  The cake itself a fire hazard filled with layers of sweet gluttonous butter and sugar.  They sang Happy Birthday all while bringing the cake right towards your face.  As if blowing out candles is hard enough, this is your life at stake so using as much exhale as you can is the goal. Then the natural send off was with the waitresses cap guns raised to the air and pop pop pop pop... in unison..Screaming like someone has caught them!
And that was it and the party was over and you were given a wooden Indian head coin.  Somehow it was a thrill any which way you slice it.  Wild West or not, they put on a hell of a show for anyone’s birthday, sparklers included.