The classic case of catching a cold. 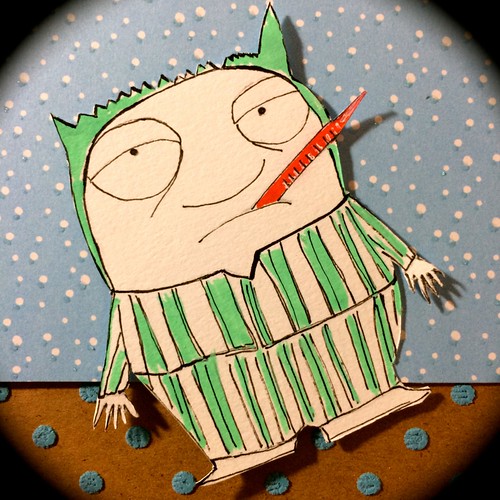 To catch a cold is a good phrase.  Like throwing a baseball into a catching mitt.

We exchange many things as humans.

If you have kids you quickly learn that when you get that phone call from the school nurse you are picking up a ball of contagion in some form or another.

A fever means the body is trying to get rid of a virus or bacteria. Whichever part of the body it has decided to possess.  The head ,throat ,chest ,nasal passages, skin or stomach.

If you never went to nursing school, here is where you begin your degree without a diploma.  Care-taking 101.

You may have one child or more.  And a cold time warp of sorts can last up to a month if everyone’s immunity is compromised.  It is like a slow moving set of dominoes.

Usually worsened by winter because everyone is cooped up and its desert dry.  This works if your a cactus not a moving entity of mostly water.   Most doctor's say wash your hands, this will most definitely prevent the spread and the best way to not get a cold.

However I disagree with them. Any parent would know that if you are trying to help them, you are around them and the little monster of contagion is your monster that you have to take care of.

They sneeze on you and leave their fingers and imprints everywhere.  You can’t get them to wash their hands under the age of 10.  They haven’t been given that fear of wash your hands or else and they haven’t made a dispenser like those at supermarkets that automatically spit poofs of white foam on you.
They will also vomit if its a stomach bug.  You can’t wash your hands enough because upchuck Johnny just projectile vomited for the 5th time and you happened to catch it in your hands as if to preserve the tiffany light, the 400 count egyptian sheets or the diamond encrusted tiara you have on! (not)

You learn the hard way and no matter what you are in for at least half of the things they bring home.

Even with vaccinations that have been given to them, there are still tons of bugs to get out there. Some years are better than others.

There are so many colds a pediatrician sees.  I’ll never forget bringing my oldest son in once with a rash and the look on the docs face.  She began by saying. “Hey can I bring in some nurses?”  To which I said sure why not? If it will help?

They came in looking at him like a specimen and the doctor said. "This ladies is a classic case of hand,foot, and mouth". You get the fever first and thats when you are most contagious then you break out and have a skin rash for about a week where you just look bad.

Funny right after the doctors we went directly to the supermarket where some older lady looked and him and said to me.  "He’s not contagious is he?”,  I replied and said. “No he is not contagious, just a
classic case."