The case of da bubble butt 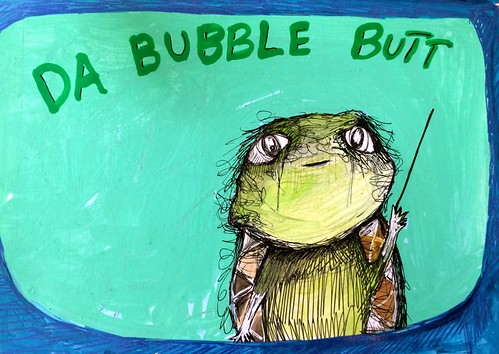 A year has passed since we were on a trip to the Florida Keys.
I can visualize the clear blue water and the miles and miles of thin stretched highway. I also can remember the name bubble butt.  Let me explain because its not what your thinking.
I’m somewhat of a planner when traveling.  I look for things to do and places to see while away.  We kayaked through the mangroves, walked on a retired highway that is now a path for joggers, saw plenty of sunsets and fed the tarpon. We took several tours as well.
Tour guides can be very helpful.  They can give you direction towards subjects or history.  A walking encyclopedia of knowledge that you may not have known stuff about. I believe that each tour with a different guide can be very different with training involved or not.  They can also be memorable for other reasons.
We stumbled upon a turtle hospital while driving around in the Keys.  It had this visually seductive sea foam blue covering on the buildings.  The kind of color that makes you think of hospitals.  It by color looked legitimate. There were plenty of cars parked outside any given day that we drove by. So curiously I decided to look it up and see the reviews and they were mixed.  On a whim we figured lets have a look.  Maybe we will learn something and how they help injured turtles.  The entrance is long and thin with images and history of turtles on both walls.  They discussed the turtles that they help .The leatherback, Hawk’s bill, and Loggerhead are large turtles found in most of these warm waters in Florida.
Walking through towards the register there was a long central shelf of t-shirts, magnets, mugs and other tchotckes that have every turtle head you can imagine printed and ready to sell.
We bought 5 tickets and were told to wait for our 2pm tour.  Our tour guide would then take us to the actual hospital and back to the large tanks where they feed and nurse the injured turtles.  Seemed interesting enough.
We started off in a large room with our tour guide in front.  She placed images on the screen of turtles.  A mini lesson of sorts to familiarize the different kinds. She had a strong dialect and when talking at a faster pace it was hard to unravel.  We then went over to what they called the hospital where they operate to remove one of the many things that turtles swallow and get stuck in the digestive system.  I believe turtles think everything to be food including trash.  In the tight room with 60 or more people the tour guide passed around items that have been removed from many turtles and fish hooks were the top item getting stuck.  Then there were diseases or growths that turtles had on them.  One in particular had a growth on the back of its shell.  She explained the medical term first then as if it was too hard to bring up the name again she brought up the nickname da bubble butt.  This is where the saying da bubble butt continued throughout the rest of the tour for 90 minutes.
If there was a growth on the turtle it had a case of da bubble butt.
A year has gone by and this is what I remember from the tour, not the original scientific name but the nickname itself.  A saying that I wouldn’t otherwise recognize, an inside joke of sorts.  The case of da bubble butt is a memory of a trip I will not forget, lets hope that the tour guide found another nickname for the growth on the turtle or some other means of employment.