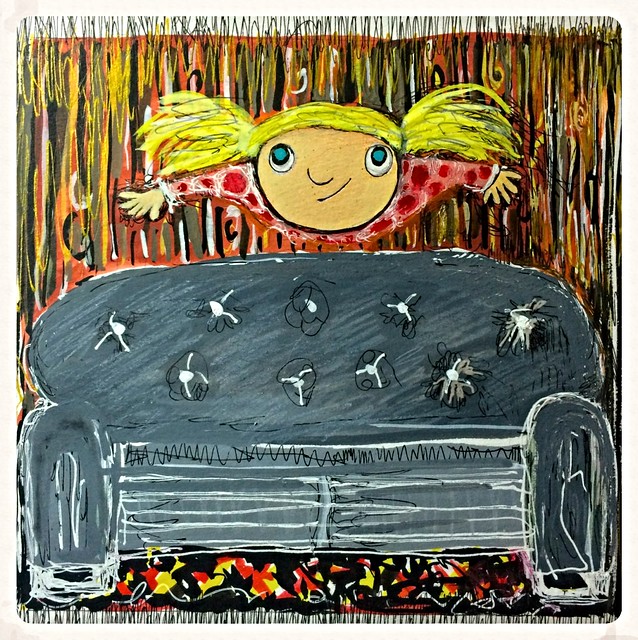 There was a pewter grey couch in our basement.  During the 70’s it seems that everyone had a redone basement to either party with a fully stocked bar and of course a place to send kids away fitted with cable tv and a couch with some toys.
My sister Christine was taking gymnastics on wednesday evenings and I would watch her jump over a beam and flip. I thought to myself it couldn’t be that hard? Me and Debbie Keiser had an idea.  Why not try it in my basement and run fast and flip over the couch?
We ran and dove and it sure was fun. I kept going faster and jumping higher and flipping. There was so much adrenaline.
Next thing I know I was outside laying on a blanket on our front lawn. I didn’t remember this? Debbie was nowhere to be found?
I saw a blurry vision of my mother coming towards me as if a dragon with red hair and smoke coming out of her mouth and nose.  She looked pissed and said.
“ Do you know what day it is?” No I replied… “It’s a Tuesday.” She said.. Okay .. Then she looks at me again and says.”Do you know what you had for dinner?”
No I said, I don’t know?
“You Had sloppy Joe’s!!!”
Okay, I guess i did I said.
After those two q and a’s she didn’t say much else except that we were headed to the ER to get me checked.
Apparently, I flipped and hit my head and blacked out.
Blood came pouring  out of my nose and Debbie ran out screaming and wouldn’t talk to anyone.  They did the normal X-ray thing and I was okay.
The only thing to remember from that day was it was a tuesday and I had sloppy joes. I stopped flipping over couches after that.
Gymnastics was really not for me.
Newer Post Older Post Home