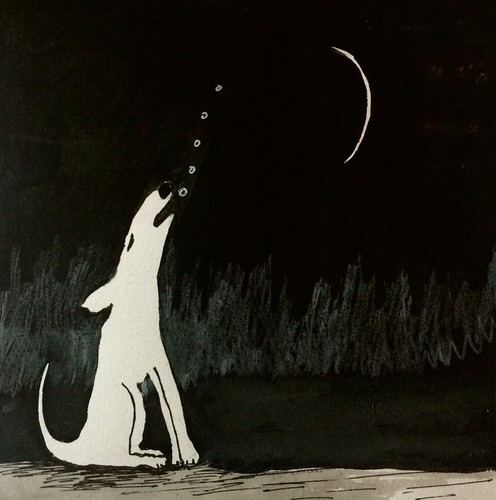 Yes I heard it.  Just as I was coming up to my front door and taking off my headphones. Howling.  Very loud howling.
As I quietly peeked into the front door there they were. Three dogs of variable sizes lifting their heads in unison and serenading the barking gods.
No they are not huskies.  Huskies want to howl all the time as they are the closest to the genetic code of wolves.
My pups are two mutts and a border collie. One large shepherd collie mix named Wyatt was closest to the door.
Forrest the border collie was on the front step of the stairs.
Fez the smallest of the three, a papillion chihuahua mix was halfway up the stairs sitting.
If there was a curtain call for an audition on howling, they would definitely get a call back on their delivery.
My husband had said they did this several weeks ago when he was in the basement and the dogs must have forgotten him there.
Having researched the howl there can be many factors.
Dogs howl for many reasons good or bad.
Sometimes its separation anxiety, territorial, or stating their presence.
They have it in their genetic code however distant their size and shape from wolves.
They say its as infectious as yawning in humans.
Try it in a group of people.
Yawn and see if others follow.
Most likely they will.
You can also try and howl and tell everyone your distantly related to wolves.
I don’t think you’ll get the same reaction as yawning but you will definitely attract attention.