Somewhere there is a spider sitting right beside her. 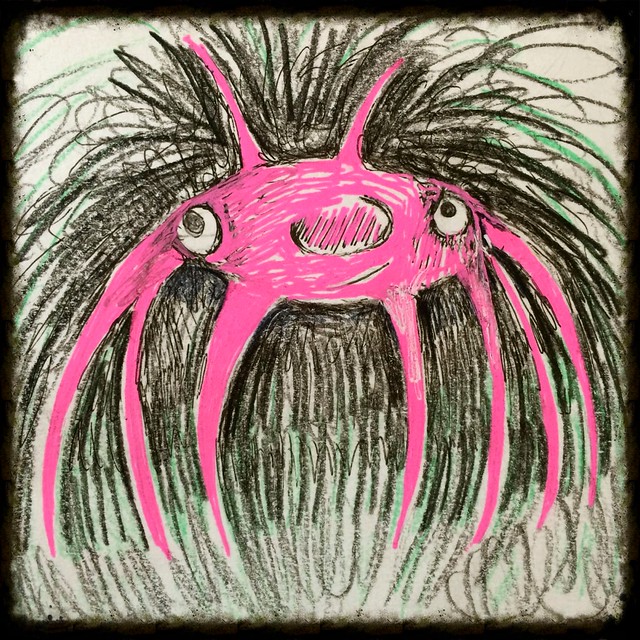 Okay admit it.  We have all been there.  Even if you are a bug lover.  In the house or out of the house.  Doing errands or exercising.  You have encountered a bug.
Usually flying of course.  Some move on land.  Mostly they are fast and hairy and have lots of legs.
Realize that you are huge to them.
Like the Tower of Pisa or The Empire State building.  Huge and slow.
And you jump and swat.  Move your hair and shake like crazy to get it off of you so you don’t get bit or stung.
The bug in question may not sting but mostly your fear of being stung gets you in a tizzy.
I have heard plenty of stories of concussions and broken legs all too many because humans choose to get on a step stool or chair to get that pesky bug off the wall or ceiling.
I must admit I have had plenty of these incidents.
A bumble bee hitching a ride on my bright green shirt into the house and me looking down to see this hairy large thing and I start dancing like I was at a rave for 12 hours trying to get it off of me.
I’ve bonked my head trying to get a stinkbug off of a hotel ceiling.
The stinkbug won. I had a large knot on my forehead to show from it because I forgot about the fancy bedpost frame in front of me.
There was also this dreaded flying cockroach scenario at my aunt’s house in Houston.
I was all alone and looked up at the high ceiling and I saw a behemoth cockroach flying and resting at the very top.
I knew that if I didn’t catch this thing I for sure would not be able to sleep through the night knowing
it was going to capture me and take me to its flying cockroach kingdom where I could be used as food for like ever…..
And so I had to plan.
With a broom, a plate, and a magazine, I acted fast.
I ran upstairs and clocked it swiftly so it fell to the first floor.
I ran downstairs and as it was trying to make its escape I quickly placed the plate over top of it.
I then took the magazine and slid it under the plate and picked it up slowly. I opened the sliding backdoor and released the pest.
Phew.
No broken bones or bonked heads.
I was alive and so was the flying cockroach for that matter.
It would live as it has done for centuries.
I marked off the accomplishment knowing that it wasn’t waking up anywhere near me the next morning.
At least for that one night.
Newer Post Older Post Home