Squid to the word. 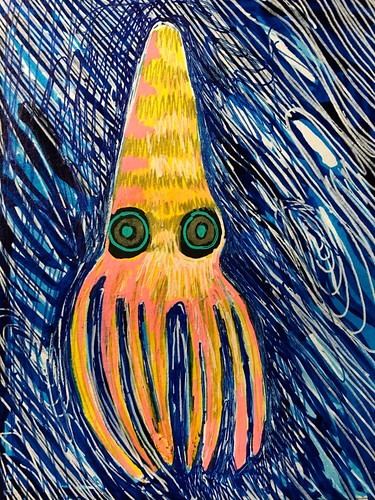 When my first born was a little toddler he loved squids. Everything about squids. He would watch the nature channel repeatedly and would talk about the great humboldt squid and how large they were.
Friends and family tried to find whatever they could on squids. There were books, dvds, stuffed animals,t-shirts and even ornaments that were given to us so he could continue his obsession on squids.
Squids to him were the coolest thing on earth. And please don't confuse them with Octopuses!
Squids lived in open waters of the ocean.
Octopuses lived as bottom feeders that stayed way down on  the ocean floor.
While Octopuses caught prey with one of their many arms squids would use their tentacles.
The squid preoccupation continued well into a year even with a hand-made costume from an old bridesmaids dress for halloween. The gold and brown sparkles on the dress would work perfectly to make a great looking squid.
I worked on it for hours and when the candy holiday got here he was ready and full of bravado to tell everyone that he was indeed a squid.
We perused the neighborhood meeting and greeting everyone and surely most did say what a great squid costume!
All three feet of him waved to neighbors until one dad who was at least 3 feet taller then him exclaimed, " What an awesome Octopus costume!"
He looked over and way up at the dad and said, "thank you, but I'm a Squid, not an Octopus."
Squid to the word... and away he went with his bag of candy.