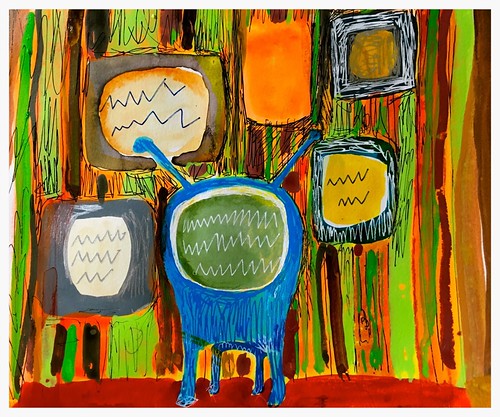 We cut out cable about 5 years ago.  Yes , while 500 hundred channels may not be enough for some it was too much for us.
I found myself spending more time changing the channel then settling in on a show.
Having grown up with a small color TV in the 70s before the grand old age of cable there were only 3 or 4 choices tops.
There was 3, 6, and 10 and channel 12 PBS.
News in the morning, news at lunch, followed by a soap opera of sorts, then more news at 6 and most times in the evening, The Lawrence Welk Show at my Nana's.
The TV was left on in the house much like an extra relative was there talking to you in monotone.
This extra “voice” kept everyone company perhaps.
Back then you mechanically turned the dial with your hand.
At 5 in the morning there would be a repeated rotational video of Philadelphia and the surroundings and Philly soul music in the background.
Local Channel 6 would have a commercial that would question’ “Where’s that action news man again?”
By the mid-1980s there was revolution with cable.
It all started with 30 channels or more.
This was the new wild west of the moving image.
Everyone had a tv then a color tv followed by cable.
Small companies that set cable wires everywhere became behemoths.
These pioneers had stories  and channels that would go on and on.
It began for us locally with Suburban Cable.
This company that I even worked for briefly that then got swallowed by a bigger pac-man called Comcast.
There are good and bad things about the growth of a plethora of channels.
Things to watch could be local and instead of decisions that were made with only four channels there were even more choices.
This revolution made many millionaires and billionaires and forever changed the skyline of Philadelphia.
People had more to choose.  Lots of networks.
And the landscape of being a celebrity had changed.
Talk shows and food shows and reality TV scripted or not.
Our own household was bored of the best biggest burger and the furniture redo market playing over and over again.
So we left for pure content in Netflix and the Internet.
No bobble heads spewing news unless you wanted them too.
I can’t say that I have stopped completely cold turkey with junk TV.
I am not pure and disciplined to the level of saying no especially when we have cable in our hotel room on vacations.
Who can’t help watch an episode or two of my 600 pound life or Dog the Bounty Hunter?
Yes I might binge a little when I’m not home.We all have our cravings... even having that potato chip bag emptied all while watching a modern day soap opera of reality Junk TV, scripted or not.
Newer Post Older Post Home