Rags that are rich. 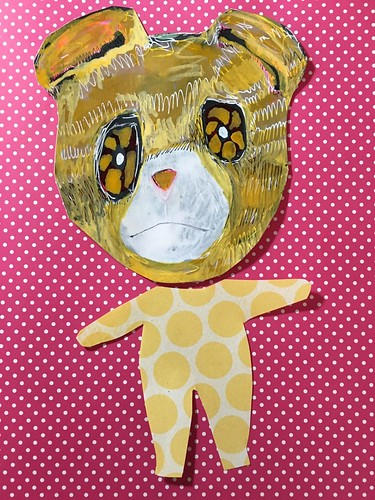 Did you have an imaginary friend as a child?
A woobie, stuffed animal, blanket, lovey, or binkie?
There are plenty names that have been given for the security blanket.
If you have had one as a kid you know exactly what I am hinting at.
The other day I happened upon one while shopping.
On the floor of our local sports retail shop there was a stuffed animal.
Tattered and worn out as if it had been dragged through everything and never washed ....as the smell was lets just say comforting to someone?
Perhaps I could have stepped over it,on it, or ignored it ...but my heart sank knowing that this was someone’s imaginary friend that they talked to.
Without hesitation I gently picked it up as if was an injured animal and gently placed it on a blue bench hoping that the mom or dad
would realize the stuffed animal was gone and retrace their steps back to where it became lost.
As a kid I had a blanket or woobie that I dragged around.
Perhaps it eased my anxiety as I would take it everywhere including on airplanes, car rides, and my
grandmothers house.
This blanket got to look like a rag through wash and dragging it to and fro…. and became an unrecognizable tattered scrap and
sadly was mistaken for trash and sent to a waste dump somewhere outside of San Francisco in the 1970s.
Fast forward years later and my own daughter had a pillow or woobie.
It was at one time a beautiful pink pottery barn pillow with colorful
green and yellow flowers that was given to her from her own grandmother.
My daughter took this everywhere and while I used Shout Out to rid the pink pillow of kid stain, it just couldn’t keep up with the washings and again became another rag.
But this rags to riches has a happy ending.
We happened to be staying at a hotel called Congress Hall in Cape May, NJ.
We were there for a few days and then went to pack everything and somehow misplaced the pillow.
On the drive home I got a frantic phone call from the front desk clerk at the hotel.
The cleaning ladies had found something!
Yes, they noticed and without blinking an eye knew that it was a child’s security blanket.
I am sure that in their mind they could relate to their child or grandchild and the thought of losing
the special cloth, teddy bear, or rag.
I was grateful they just didn’t place it in the trash.
We were too far back towards home to turn around so we had the pillow Fed Ex’d home.
The tattered worn out pillow got shipped overnight.
My daughter’s rag went more places then we did that weekend.
Newer Post Older Post Home