It is a coin toss. 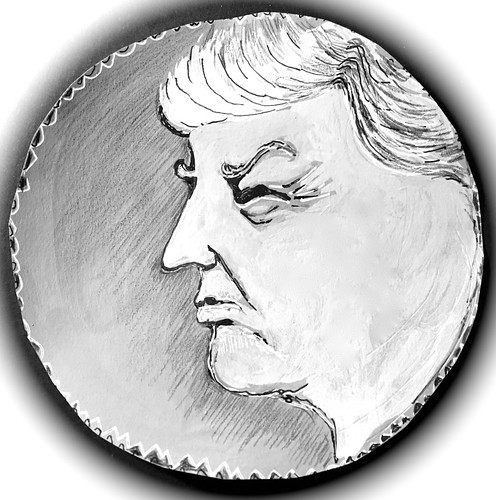 Stranger then fiction.
The election process of 2016 has been surprising.
A revolt of sorts.
On both sides.
If we could go deeper then the why?
Somehow Trump has aligned himself with a mass of people that feel pushed to his ideations.
Even if fact or fiction.
Orchestrating popularity in a tv show where the words “your fired” gained shock with appeal.
The process to which elected officials have won the election has changed.
Money and power in Washington D.C. can get you plenty of things.
But there is like-ability factors.
Is the person trustworthy?
Will he or she do what they say?
Will things change?
What causes people to believe in someone?
Willing enough to rid themselves from the status quo?
The normal politicians.
The normal progression of the political process.
This sure is a page turner.
If someone had said to me that Trump would be on a coin and win a presidency.
I would say they were nuts.
Now with the way things are I’m uneasy with thought.
The momentum has picked up.
Could this even be a case of looking back to a college course I took in political science.
Jose Ortega’s The Revolt of the Masses?
A book written years ago that sure seems to ring a bell with the here and now.
Time will tell.
It is a coin toss.
Vote.
Newer Post Older Post Home