The world according to Fez. 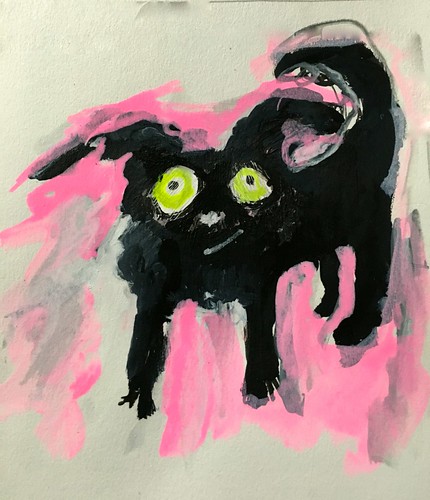 Things come in three in my world.
Three kids.
Three dogs.
Most years while living in Phoenixville we just had two dogs.
We used to have cats.
They got old and eventually passed on.
At some point while my daughter was younger I had made mention that I had never had a small dog.
I’ve always had dogs growing up I said.
But they were larger.
An Airedale, Rottweiler, Shepherd/Husky mixes and a cattle-dog who seemed like the reincarnated version of Winston Churchill.
I told Savannah that maybe someday when we had no more cats we could get a small dog, a third dog.
A year or two passed and she remembered.
In September when it was back to school I had mentioned that I was on the All for Paws FB website and there was a small dog named “BlackJack”.
I showed her the picture and made mention that we just might adopt him.
I talked to her dad about it as well.
The next day when getting out of school I saw her new teacher.
"When are you getting that new dog?
Huh I thought?
Oh geez.
Savannah was convinced ….then I thought why not?
This is a great place to have a pack of kids and dogs.
I went and filled out the adoption form.
Told my two good friends that I was using them as reference and in a day or two got the call that I was approved.
It was a snowy day and we went to the foster parents place to pick Fez up.
He looked about 25 pounds in the picture I thought but my husband had told me otherwise.
The dog is smaller then that for sure he said.
We entered through the front door and saw that there were chihuahuas and this tiny long-haired black puppy next to them.
He was about 8 pounds with long dark furry hair and under the chair barking.
Smaller then a cat even?
We named him Fez.
The first night Fez tried to make a get away but we found him easily in the snow.
He got used to us and we got used to him.
For such a small dog he has the confidence of a lion.
When people approach too quickly, he jumps and gives a quick muffles of what to him is a sizable bark.
Most laugh. Some say easy there killer...
We get stares as people are unsure what he is.
Papillon and chihuahua I say but mostly I don’t know.
We do know that he is a rescue.
A dog that got lost or was abandoned and couldn’t find his way home or had no home.
All for Paws Rescue helped.
And now he is home.
Seems like its his world not ours.
Three can really be a magic number.
Newer Post Older Post Home