Its back, hot turkey in a bowl. 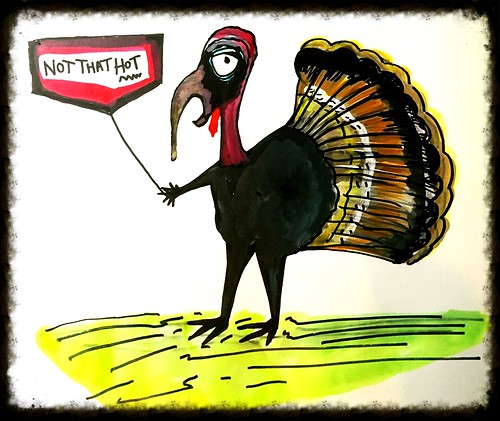 I'm getting gas at the local wawa here in town.
I see the advertisement for food on the pump.
The flashy ad says that its back! Hot turkey in a bowl!
It was the early morning hours when I was there so the idea of hot turkey with gravy in a bowl just didn't seem that enticing and as if turkey meat ever leaves the country?
I guess the explanation to the wording.. its back! is that it is seasonal like pumpkin pie, apple cider, and squash.
How turkey became the official bird of choice for the feast of Thanksgiving and the holidays is unsure.
Some say it had to do with economics.
Turkey was large enough to feed a crowd and less expensive then a goose.
There were wild turkeys milling about and the pilgrims were able to catch it way back in the 1600s.
There are many fix- ins involved with the turkey.
You can make a sandwich, have stuffing with it or if you need it to be gluten free, there is hot turkey in a bowl. Its back!
Thanks to the geese who were too pricey to eat.