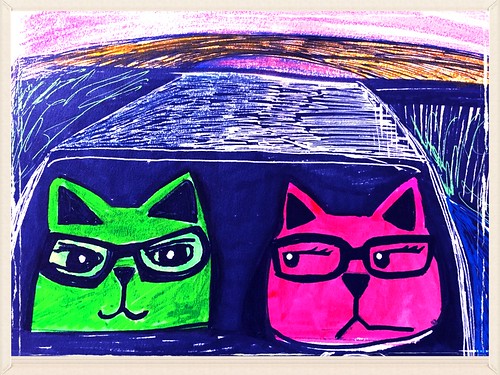 Back in 1986 I had received my drivers's permit paper and got the checkmark of approval from the driver’s ed instructor from our high school to go and try for the drivers part of the test.
My mother stubbornly got in the car and drove me to the license center.
There was a line of frightened teens waiting for the test takers.
I finally got up front and saw that the previous student had failed.
With a disappointing grin they cowardly walked by and I could surely feel their failure.
I looked at the instructor and got the go ahead.
Then a quick glance to my mom to which had a newly lit cigarette who then said to me you’ll probably fail to.
I got in the car and preceded to do everything he said.
Quietly in my defiant mind I knew that I could pass.
He asked me to even parallel park the behemoth cinder-block colored wagon with wheels and I did.
This was before mirrors and noises and help from cameras.
We got back to the building and he signed off and looked at me and said, you passed!
I was thrilled.
Driving was important as it was the likelihood of freedom mixed with some responsibility.
The possibility of a job and taking my sisters places immediately made for gained confidence.
Although as a teen I do remember record periods of lapsed judgment in the driving department..
Silly things really..
Like leaving the lights in the car then to wear out the battery, running over parking cement structures,
blowing out tires and my one chance at reliving the Dukes of Hazard by free flying my mom’s Chevy Eurosport on Valley Road.
My sister was in the car, we were talking not texting, and I was perhaps driving over 50 and hit a bump
and whoosh we were in the air.
I panicked and slammed the breaks so hard that they locked and the car coasted down the hill.
The next thought was that the chain link fence next to the road looked like a pretty good stopping
mechanism and so I went right for it.
We coasted with breaks locked and finally stopped as my heart dropped to my stomach.. I was sure to get a whooping or grounding from this accident.
I then looked at my sister Christine to see if she was okay.
She was crying laughing and said….OMG that the most hilarious and fun time I’ve had with you in the car..
"Michelle, I’m about to piss my pants!!!!"
We got out of the car and walked around to see if there was damage.. nothing.. not a scrape or dent or flat tire.
The car was in meticulous condition.
I then restarted the vehicle thinking that it might stall and again started back up like nothing had happened.
We drove home and spoke of this as being a silent story between the two of us.
She has kept that promise for more then 30 years.
All thats left is the memory and the story and thank goodness cars aren’t kept like antiques.
Someone would definitely see a mark from that episode somewhere.
But now its just squished metal.
Newer Post Older Post Home