We all scream for ice cream. 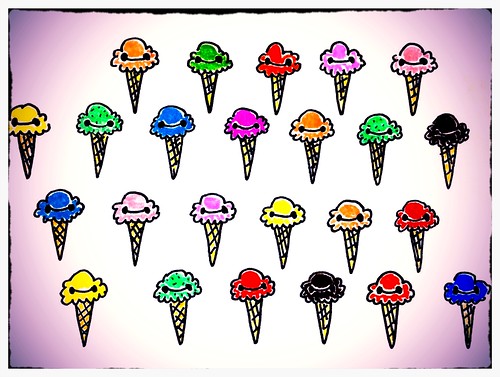 Everyone has their favorite.
Statistically, the number one flavor of flaves is vanilla.
Vanilla bean, french vanilla, or pure vanilla.
This flavor can easily be swept up with hot fudge or caramel, sprinkles or jimmies, all while being served on a sugar or waffle cone or cup.
Mint chocolate chip is my first.
The family likes peanut butter swirl, chocolate, and raspberry.
Every once in awhile to challenge ourselves, we try something new.
Usually it doesn’t have the same feelings as your favorite does.
Once while camping in the Poconos, we got word that the campshop had homemade ice cream.
The talk was we had to try linden-berry.
It was fantastic according to several of our local campmates.
When we went for our large walk in the heat ...what better thing to do by stopping in the campshop and purchasing the flavor that was suggested.
I got it on a cone.
From the looks of it, linden-berry was bubble gum pink.
I imagined the mixture of color was because of the sweet juicy berries and that my first taste would be like a bursting raspberry adventure.
I assumed the position and began to try it.
My eyes must have said it all after coming out of the store.
It did not taste like berries or raspberries or anything fruity?
It tasted exactly like pepto-bismal!
I looked again and took a break figuring that maybe my tongue knowledge was wrong.
Then I asked my family if they could try it.
They aren’t suckers and saw my face and said forget it….
I then looked at the ice cream and the trashcan and the ice cream and the trashcan.
I couldn’t commit to the idea.
And there it went….in the trashcan.
I imagined a flavor of my own instead of asking the campers exactly what it tastes like.
I tried to be ambitious with the ice cream but from now on I’ll stick to my favorite of mint chocolate chip.
Expecting the history and the feelings and getting exactly what I paid for on a hot summer day.