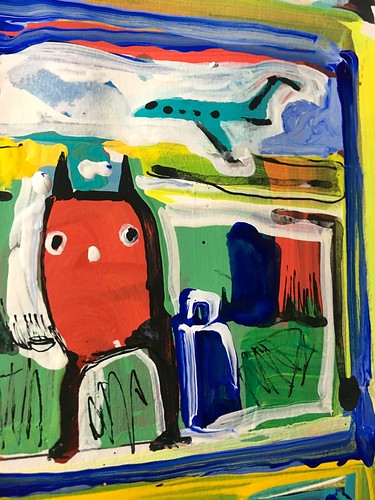 My kindergarten photo was taken at Francis Harvey Green Elementary.
Unbeknownst to my mother, I had taken scissors and a TWA ambassador pin to school.
I managed to somehow quietly cut my bangs at school and placed the pin on my corduroy white dress.
I was proud to wear the pin as my dad was working for the airlines.
He worked in the hangar at the Philadelphia International Airport not far from where his father worked as a crane operator for Scott paper.
As kids, he would take us on occasion to see the large planes parked in this big garage where they would get
fixed and cleaned.
We drove on the tarmac to see the planes fly.
The noise and the power was an experience.
We could see the jet fuel exhaust shimmering through the horizon like melted sizzling butter.
As a family, we also had the perks of flying for free or standby.
Every full time employee at that time had the advantage.
Flying then was fascinating and a privilege.
The thought was... cost was driven by how they valued the employees.
The perks were good and the atmosphere friendly.
The history of TWA stems back to 1924.
Howard Hughes even owned it til the 1960s.
By the 1980s deregulation began.
It was supposed to help the industry and make for healthy competition.
By the 1990s some airlines were in debt and thus began the acquiring and mergers that now have us with what is a bit of a monopolyor  as they say oligopoly.
American eventually acquired TWA and my dad was then laid off and began to look for another job.
The perks of his prior employer were still being enjoyed by my family for a few more years.
I got to go first class to Rome by the way of someone who knew my dad and
with special measures an empty spot became mine.
I went to Paris with my sister and to London with my aunt.
These were quick trips with barely a dollar, staying in youth hostiles and pensiones.
I also was able to get to Houston and on the way back to Philly somehow charm my way
onto a flight from another sister airline as mine was overbooked.
I was meeting my then boyfriend at the time who was going to surprise me with a trip to Maine.
Somehow he had gotten word I missed my flight and was bummed as the tickets he had bought were non-refundable.
For whatever reason I decided to call on the then air phone(no cell at the time) on the plane to say I’d be in Philly well even before the flight I was bumped from..
This never happens anymore.
Flights were exciting.
The attendants dressed fancy and seemed proud of the service they were giving.
As a child we would even get a TWA bag of goodies.
A sleep mask, a TWA pin, a bag of cookies, and a small set of color forms.
It was the smile, the service, the way the employees valued their job and the perks that made working for the airline industry worth it.
And if you were lower or middle class you were still treated with respect as individual, not a number, not a frequent flyer, not a gold member or a silver one.
You were just a person traveling to your destination and the seat that you bought was where you were going to sit while in the air and to the tarmac.
Now while the airline managing directors pay bookoo bucks to some marketing guru to manage the already sour dreadfulness of flying, the answer is in part from the past when it did work for a few years.
Value your employees, make them a part of your brand, give them some sort of ownership but make sure that they value people as humans and individuals.
Sadly all the money making at the top has gone to the clouds.