There will be mud. 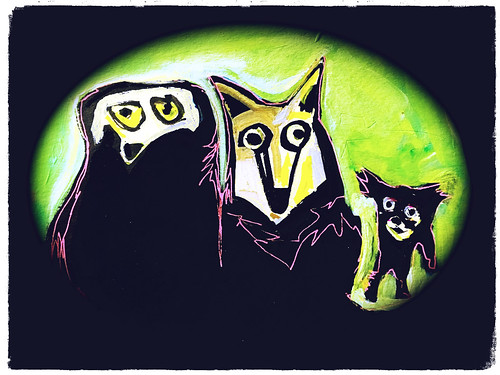 While hiking in the woods, our dog Wyatt loves to jump,hop, and go off the trail looking for vermin.
Deer, chipmunks, voles, and squirrels better watch out.
This is no ordinary dog.
This is a rooting tooting 75 pound amber fuzzy mixed mutt that is stumbling your way to find the critter.
Our four-legged all star dog seems to think he is a hunter.
Never has he ever caught a furry thing til last week.
Somehow a squirrel ventured into our garden foraging for acorns.
This isn’t unusual but the squirrel decided it wanted to come into the house either by
the door or through the second floor screen window.
I let the three dogs out back to inspect what the squirrel was doing.
All three began to bark and jump and dance.
I couldn’t figure out what it was doing but assumed by their behavior that it was still there.
I went out the backdoor and there it was crazily climbing the house.
My thought was to get the hose and spray to get it away from climbing anymore.
It seemed rational at the time.
I sprayed and it jumped... unfortunately into the direct path of Wyatt.
Wyatt is a pouncer and the squirrel just couldn’t escape the frenzy of the three dogs.
I quickly tried to spray the dogs with the hose to try and get them away
from the squirrel but it just created more excitement and more mess.
They became a pack of dogs that just weren’t listening.
The 75 pound shepherd was passing the squirrel back and forth with the 35 pound
border collie, all while the 12 pound papillion chihuahua refereed the situtaion.
The wild wolf that was bred out of them seemed to show up that day.
Wyatt was proud and he surely believes he is a hunter now.
No squirrel got into the house that day with those three.
Paw prints surrounded the inside and outside of the house.
A parade of dancing dogs stomped around and howled.
There will be mud.