Mr. Pervert and his search for jewelry. 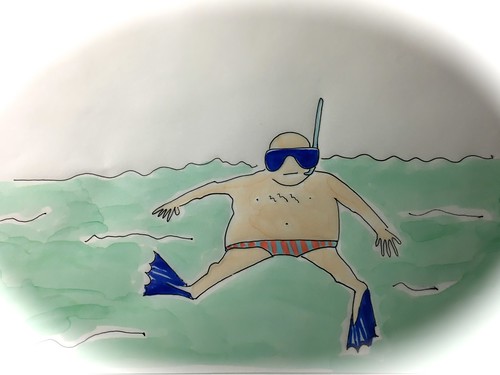 Current events have a funny way of touching in on the past.
For those who speak out it may be a process of healing and a voice.
Everyone has a story.
As a child I lived in a small row home.
There were a few hundred of these brick homes that were separated into courts.
We had a community pool and a large building that could be rented for parties.
At 13 years old in the early 1980’s most of the kids in the neighborhood had summers off.
To young for a job and not enough income in the household for us to go to summer camp.
Most parents worked and usually the oldest sibling was in charge as the temp adult.
One time my mother was persuaded by a cheap bible summer camp that
provided food but by the time we were through the 4 weeks we were singing
songs of how Jesus loved us among other hits we had happily memorized.
No more camps then and most summers were about our own freedom.
There was food in the house and junk food at the pool vendors and the drive by ice cream man.
We would save our change or hit up our Nana for some cash.
Days went quick while in the woods, at the playground, and the swimming pool.
The neighborhood pool was an L-shaped one with a separate baby pool.
There were 2-3 lifeguards and plenty of chairs and a diving board that was just as good as any fancy country club.
We had a gang of about 7-10 kids usually.
This was back before cell phones or texting.
When the adults left in the morning for work ..somehow we all were able to get breakfast and
walk a half a mile to the pool and spend hours there.
We were for the most part aware of our surroundings and had a radar for what we thought were creeps.
There was one guy in particular at our pool.
An older neighborhood man who was bald and fat and wore a speedo.
Speedos have never been in and surely that to us was the first sign.
He would show up twice a week in the summer to do “laps”.
He would wear snorkeling gear.
He seemed to be particularly interested in the diving area of the pool.
He would have his goggles on while young women jumped off the diving board.
To us it was not a coincidence that he was underwater when women jumped.
We did tell the lifeguards once or twice and apparently they did talk to him.
He gave the excuse that he was searching for “jewelry”, like diamonds and such at the bottom of the pool.
Somehow this seemed valid to the lifeguards and thats about when we just starting calling him Mr. Pervert.
Mr. Pervert is here.. we would say amongst ourselves.
We would laugh and giggle and stay in a group and would not dive when he was there.
There were no diamonds to catch and the speedo did’t help with the speed of his swimming.
Smoke and mirrors.
A creep is just a creep.
Newer Post Older Post Home