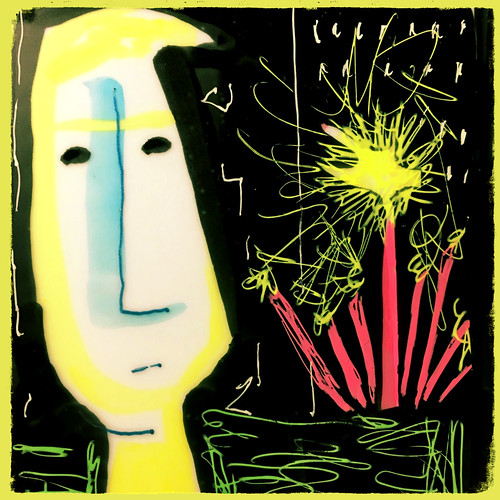 Its been an exhausting year of news media.
An unsettling unsureness.
Yet some of the change has been for good.
Look at the way people, women in particular are treated has defined this year.
Harassment is not accepted nor is victim shaming.
There's constant coverage of this and has the power to make change because its not okay.
I recently spent the day in NYC with my daughter.
We walked the high line and got tickets to the Whitney Museum of Art.
Snow fell steadily as we walked the old train rails through art and nature to the museum.
The Whitney has new shows which is exciting~ like opening a grab bag,
not knowing the potential of what will excite you, amuse you, shake you
to the core emotionally or piss you off.
We got off the elevator and entered the show, An Incomplete History of Protest (1940-2017).
This show resonated so much with the events of the now.
The mistreatment of people because they are different.
Racism, sexism, and more.
Politics and liars,  people and artists who spoke up or boycotted things because they believe it is good to speak up.
There were videos, conceptual art, photos, letters, trophies, flags and a large photo of a patient who died of AIDS.
Faith Ringgold’s painting,Hate is a Sin, was placed in the center of the show.
The colors and lines were shaped like the confederate flag.
Instead of stars the painted message was hate is a sin.
Surrounding the flag was a handwritten sentence on how she had personally experienced hate.
The painting was small, eye level and packed a punch of what artists and art does best.
Transform.
Ask the question of identity.
Enlighten as well as enrage.
Speak up.
Inform.
And change the way you think.
I kept walking through each room and engulfed the show quietly collecting my emotions which were raw.
Even as far back as the 1940s, we are still recycling all kinds of messiness.
I left the floor in a trance like state.
Art is the enlightened shaman.
A truth seeker.
Sparks will fly always.
Beholden to the artists and their stance.
Each of us has the potential to assert wisdom in many ways and forms.
Newer Post Older Post Home